Type your search terms above and press return to see the search results.

I had a goal of posting two new recipes on Chompzone a month. I succeeded in January, fell flat and February and now it’s almost the end of March! Yikes! But this one is a goody.

A few weeks ago my dad took me to a Venezuelan restaurant in Philadelphia that is famous for its hot chocolate and being gluten free. The hot chocolate was amazing (you eat it with a spoon!) but it was the arepas that won me over. How have I never had an arepa?! I looked up where you can get them in Boston and it was Jamaica Plain or other parts of the city that I rarely frequent.

And so I thought.. how hard can it really be to make these? So I decided to look up a few recipes and realized… this is really easy. And when I discovered we didn’t have cheddar cheese (which James and I are convinced we both bought last week… so its somewhere in our house!), I thought I’d make use of the chicken leg and thighs that had been cooking in my crockpot all day. Thus, a recipe was born. 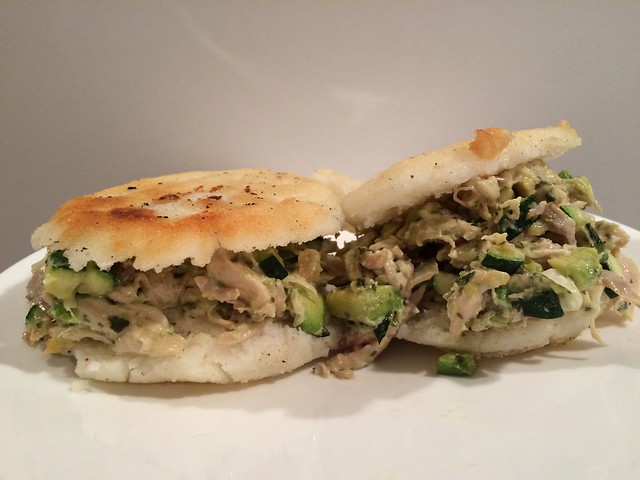 Here’s what you need:

Mix the corn flour and salt together in a large mixing bowl. Make a well in the center and add the warm water. Mix until everything is incorporated. Let rest for 5 minutes.

Divide the dough into 8 even balls. Flatten to about 1/2-inch discs each. In a large frying pan (with lid), head 2 tbsp of oil on medium (if you’re using cast iron I am imagining you can get away with less oil). Add four of the corn patties and cover. Cook on medium heat for 6 -8 minutes.

Remove cover, flip and cook uncovered for another 6 – 8 minutes. Remove and let cool on a wire rack (put paper towels underneath to catch oil drips).

Add 2 more tbsp of oil and add the remaining patties. Cover and repeat the cooking process.

The beautiful thing about arepas is that you could fill them with about anything. I had been cooking a whole bunch of chicken thighs and legs in the crockpot, and a recipe was born. I looked at a few other chicken arepa recipes for inspiration, and got to work. Here’s what you need:

Shred your meat and set aside. In a small frying pan, cook the onion on medium heat (use a small amount of oil or Pam to keep it from sticking), then add the zucchini. Add the red pepper flakes and cilantro (if using fresh, hold until the end).

Add onions and zucchini to the chicken. Add the diced avocado and mayonnaise. Mix until combined.

Squeeze the juice of half of a lime and mix to incorporate. Add fresh cilantro if using. Salt and pepper to your taste.

Cut the arepas in half (like a hamburger bun) and fill with chicken salad. Place top back on and enjoy!